Inhumans, servant to the Royal Family

The woman known as Marilla was born in Attilan, home of the Inhumans. She would describe herself as not exactly a “prime specimen.” Marilla had an appearance that could be considered grotesque (though it did change somewhat from artist to artist). Generally, she had enlarged lips and cranium, sloped forehead, three enlarged toes on each foot instead of five and black and yellow spots on her body. She recounted that her appearance caused her a degree of isolation in her youth, which she found painful. [Avengers (1st series) #389] 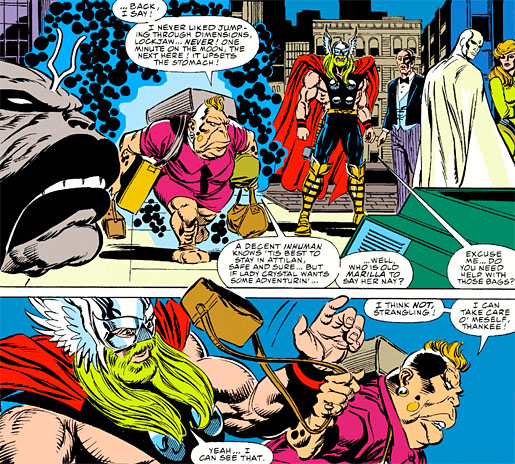 It is unclear if Marilla’s “unique” appearance was the result of Terrigenesis (the process that grants Inhumans their powers) but regardless she did also seem to possess some degree of increased strength beyond that of the average Inhuman. Despite her loneliness, Marilla did find purpose in work. She served as a nanny for the Inhuman Royal Family for half a century. So dedicated to her work, she claimed that she had never taken a day off, saying her maxim was that “a servants place was at their master's side.” [Avengers (1st series) #343, 348] She had a particular warm place in heart for the Inhuman princess Crystal and she was her nanny from a very young age. [Avengers (1st series) #362] 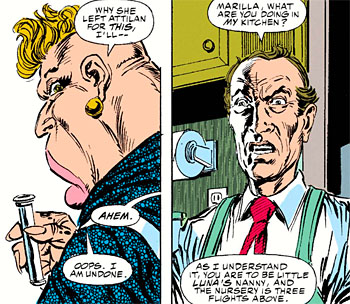 When Crystal decided to join the Avengers and take her own daughter Luna with her to Earth, the Inhuman king Black Bolt insisted that Marilla go with her to take care of Luna. Marilla did not make a good first impression on the Avengers, instantly clashing with the Avengers butler Jarvis, who found her brusque. Additionally, all the years of serving a royal family had made Marilla somewhat elitist and she had high expectations. When Jarvis mentioned that other Royals had found Avengers Mansion adequate and that he expected her to feel the same, her response was “we'll see about that.” [Avengers (1st series) #343] Marilla was not impressed with the Avengers headquarters and later described the New York Mansion as a “hovel.” [Avengers (1st series) #348]

Marilla and Jarvis' rivalry led them to be an almost comedic odd couple of sorts, with Marilla's bluntness contrasted with Jarvis' buttoned up nature. On one occasion, Marilla went downstairs to the kitchen to make Luna a bottle. While there, she tasted the meal that Jarvis had prepared for the Avengers, which she considered in her words “dishwater,” “inedible” and “swill.” Marilla “improved” his recipe by adding Menduvian Spice, an Inhuman ingredient. When Jarvis discovered her tampering, Marilla was in no way apologetic; in fact, she considered her action “heroic” and told the butler that she expected to receive his overwhelming gratitude immediately. [Avengers (1st series) #344] On another occasion, when Marilla was again criticizing his culinary skills, Jarvis exploded at her saying “enough... he did not tell her how to nanny.” Marilla was shocked saying that no one had spoken to her like this in fifty years. She went to the living room with Luna to watch the children's program Fraggle Rock. When it was time to take Luna for a walk, Jarvis played a prank on her by sticking a page on her back calling her the “Queen of Mean.” [Avengers (1st series) #350]

Unlike many of the Inhumans close to Crystal, Marilla seemed happy when Crystal reconciled with her husband Quicksilver and even mentioned that she was disappointed on one occasion to be putting Luna to bed and taking her away from her parents. Marilla really did love Luna greatly and wanted her to have a secure family unit. When she was taken by Raza of the Starjammers as a hostage, Marilla begged for Luna's life. Luckily, Luna was rescued by one of Crystal's suitors, the Black Knight, though he was grievously injured in the process. Quicksilver departed for Attitan to retrieve an Inhuman healer Galen. When they returned, Marilla was overjoyed to see Galen, that he might save the Black Knight to whom Marilla was grateful for saving Luna. Crystal was very upset following the attack and Marilla consoled her, unaware of the burgeoning feelings between Crystal and the Black Knight. The Black Knight did recover and the moment proved that Marilla was integrating into the Avengers “family” and finding her role within that family. [Avengers (1st series) #350] 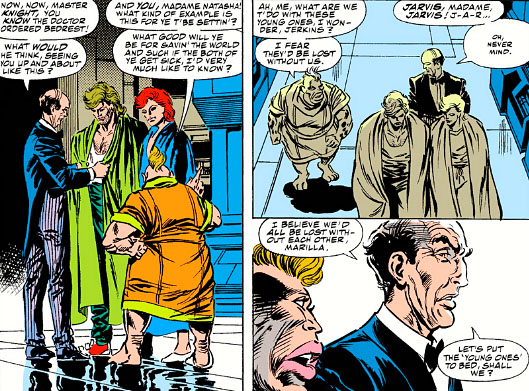 This change in Marilla was even more apparent when the Black Knight, still recovering from his injuries, collapsed while speaking to the Black Widow. Marilla along with Jarvis (whose name she was still mispronouncing) appeared with blankets and admonished the two “young ones” for risking making themselves ill. As she wrapped the Black Widow in a blanket, Marilla told Jarvis she felt the Avengers would be lost without them. Jarvis insightfully said they would all be lost without each other but he agreed they should put the “young ones” to bed. The relationship between the two of them now shifting into that of surrogate parents for the Avengers and respect was growing. [Avengers (1st series) #356]

Marilla and Jarvis still had one point of contention however: the kitchen. As a surprise, Marilla arranged for the royal kitchen staff of Attilan to prepare a feast for the Avengers. After his initial shock, Jarvis told off Marilla, saying she had usurped his position. When Jarvis appeared to upset the Inhuman dog Lockjaw by making a derogatory remark about him slobbering, Marilla surprisingly left him in charge of the staff to finish the feast. When Marilla found Lockjaw, he was in fact heading to Luna's room after sensing a disturbance. Inside, one of the terrorist Acolytes, worshipers of Crystal's father-in-law, Magneto, was analyzing her. Screener (later known as Scanner) used her telepathic powers to wipe Marilla and Lockjaws memory of this incident. [Avengers (1st series) #357] 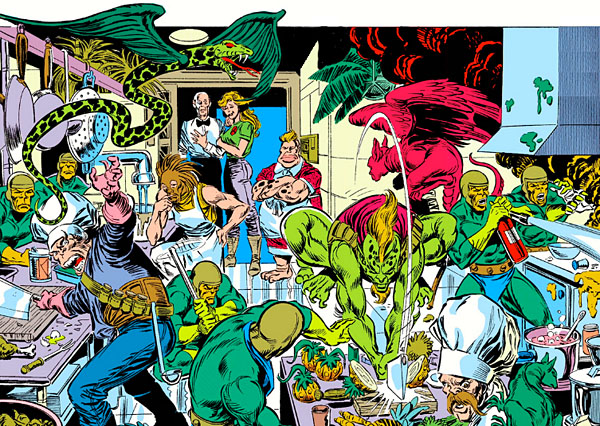 Possibly feeling respected by Marilla leaving him in charge of the kitchen staff, Jarvis thawed greatly to Marilla and the two started to see them enjoy each other’s company. The duo took Luna for a walk in Central Park one day and, even more shockingly, went to the market together on another. [Avengers (1st series) #358, Avengers (1st series) #373] 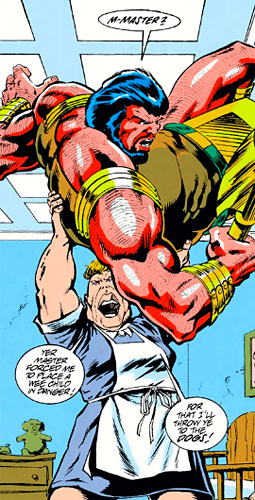 Despite her domestic skills, Marilla was also quite fierce. When Crystal and Luna were attacked by Maha Jogi and Moghu, Marilla went at them with a giant knife. Still susceptible to telepathic attacks, Maha Jogi used his skills to force Marilla to threaten Luna. Crystal broke free from their attack and fortunately knocked the knife from Marilla's hand before she did damage. The Black Widow managed to incapacitate Maha Jogi, releasing Marilla from his control. Now free, Marilla was furious. She picked up Moghu, showing no struggle with the muscular man much larger size to hers and flung him into a portal, telling Lockjaw to take him to “where he buries his bones.” [Avengers Annual (1st series) #22]

Marilla's “mama bear” did not come out for Luna alone. The Shi'ar princess, Deathcry had been residing in the mansion. Initially, she had masqueraded as a tough adult warrior, though in actuality she was just a scared teenager. When Henry Gyrich, a longstanding government antagonist of the Avengers, wanted to take Deathcry into custody, Marilla let him have it. When she did, Gyrich made an off-color remark about her appearance. Marilla's former rival Jarvis, spoke in her defense, stating that she was a respected member of the staff and Mr. Gyrich owed her an apology. Deathcry became upset by the confrontation and temporarily ran away. While the rest of the team searched for her, Marilla and the Avenger Hercules remained in the mansion in case she came back. Marilla confided in Hercules that she understood Deathcry's sadness and feelings of isolation due to experiences from her own past. Hercules told Marilla that everyone feels lonely in their way but he hoped her own feelings of loneliness had faded because she was a gem beyond value. [Avengers (1st series) #389] 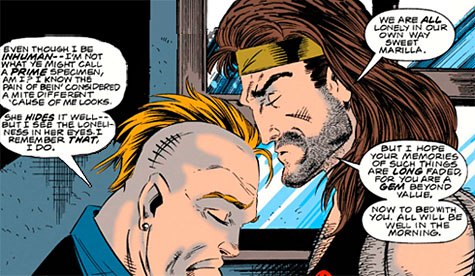 A short time after Deathcry's return, Marilla accompanied the Avengers on their vacation to the Adirondacks. Deathcry had spent several weeks being interrogated by Henry Gyrich, so she was happy to be free and was jumping into the lake. Lying in a flotation device, trying to get her “beauty rest,” she was initially annoyed by Deathcry's splashing when the girl recounted her ordeal. Hearing this, Marilla warmly told her to continue with the splashing. Marilla was sitting with Luna and several Avengers around a campfire when Hercules returned from a walk in the forest with a young man in the forest who claimed he was a fortune teller. 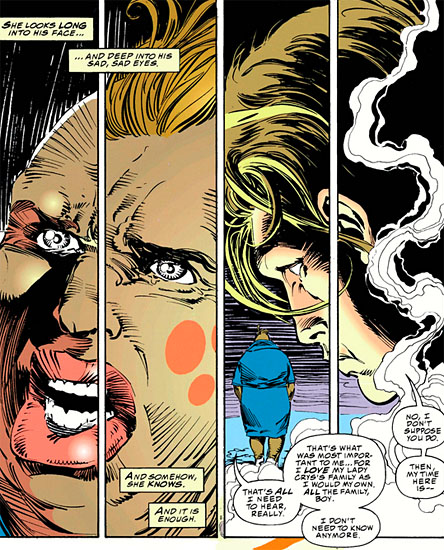 The man offered to tell them their fortunes but, when it got time to read her fortune, Marilla could feel that it had gotten cold and dark. Crying, the man told Marilla to remember that Luna loved her. “Till the day I die,” Marilla replied, instinctively knowing that the end was near. Marilla got up and walked away from the campfire, saying that she loved Crystal's family and that was all she really needed to hear. [Avengers (1st series) #390]

The exact identity of this boy remains contested but his prediction to Marilla proved correct. Marilla was killed shortly thereafter by Iron Man while under the possession of Kang the Conqueror. She had come across him acting suspiciously and, when he spoke, she knew instantly this was the end. She privately uttered a quick prayer before he killed her. [Avengers: The Crossing #1] The Avengers reacted to the death of Marilla as if she were truly a member of the family. Particularly heartbroken were Crystal, Luna, Deathcry and Jarvis. Truly, she was loved. [Avengers (1st series) #391]