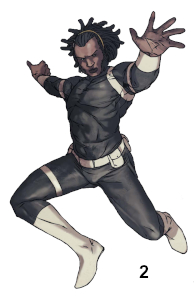 1) While he was training with Gateway in the Australian Outback, Eden wore little clothing due to the heat of the desert. He had a small set of briefs, thatch belt and wrappings on his arms and neck. Eden also had white lines of tribal significance painted on his body. [Secret Warriors (1st series) #4]

2) With the Secret Warriors, Eden wore versions of the uniform meant for traditional S.H.I.E.L.D. agents – a blue jumpsuit with white belt and highlights. The look varied between sleeveless and with tribal wrappings on his forearms still, or fully covered from the neck down. [Secret Warriors (1st series) #5]

3) As an Avenger called Manifold, Eden wore a brown adaptive material costume with his tribal markings colored onto it instead of his skin. These markings glowed with an inner light, either due to his powers or as a feature of the material. His chest symbol (the multiversal Manifold insignia) was a set of two circles connected by a line, representing his powers. [Avengers (5th series) #1] 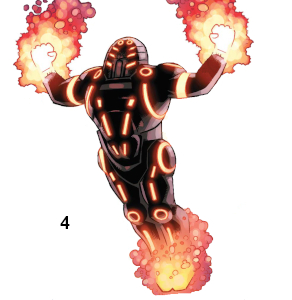 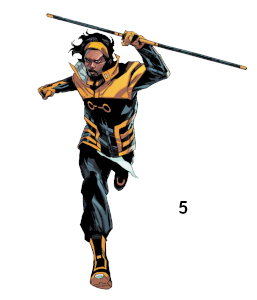 4) Under the influence of the Intergalactic Empire of Wakanda, the Manifold was reimagined as an armored foe. His suit bore a face concealing helmet with a pattern resembling six eyeholes. [Black Panther (7th series) #3]

5) With S.W.O.R.D., Eden’s old Manifold costume was reinterpreted into more casual wear. His orange and black jumpsuit is color-coordinated for S.W.O.R.D.’s Logistics Division. The Manifold symbol remains on his chest, and the suit can become space-worthy by raising the hood, thanks to Krakoa tech. [S.W.O.R.D. (2nd series) #1]