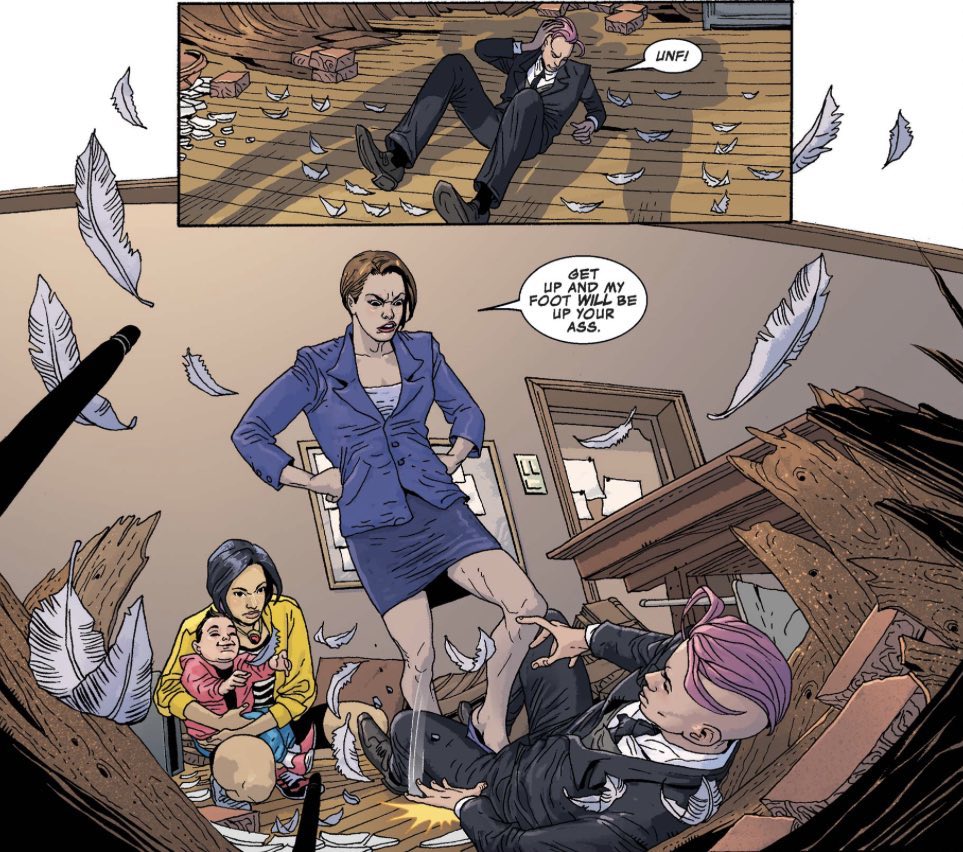 The effects of the inversion were eventually reversed but it’s unclear how much longer Quentin remained with the Hellfire Club. At some point, he took off with Krakoa to the middle of the ocean and presumably spent his time lounging on the living island while the X-Men dealt with the M-Pox Crisis and went to war with the Inhumans. He didn’t resurface until Kitty Pryde reopened the school under the name “The Xavier Institute for Mutant Education and Outreach” in Central Park. In fact, Quentin used his newfound wealth to help Kitty build the school. Despite this, he wasn’t immune to school discipline and found himself facing Headmistress Kitty’s wrath when a fight with Bling! caused some property damage. Kitty also placed him in the school’s new Special Class under Jubilee’s mentorship. Consisting of Quentin, Bling!, Morph, Hindsight, Eye-Boy and Nature Girl, the Special Class was intended for students to learn real world practical application training. Assuming this meant that the class was for students that were considered unfit to be X-Men, Quentin questioned his inclusion but Jubilee reminded him of the numerous times Quentin ruined his chances of taking his rightful place with the X-Men. [Generation X (2nd series) #1-2]

During this time, Quentin tried to rekindle his relationship with Idie but Idie, who had began taking her role and future with the X-Men rather seriously, rebuffed his attempts to reconnect. Questioning 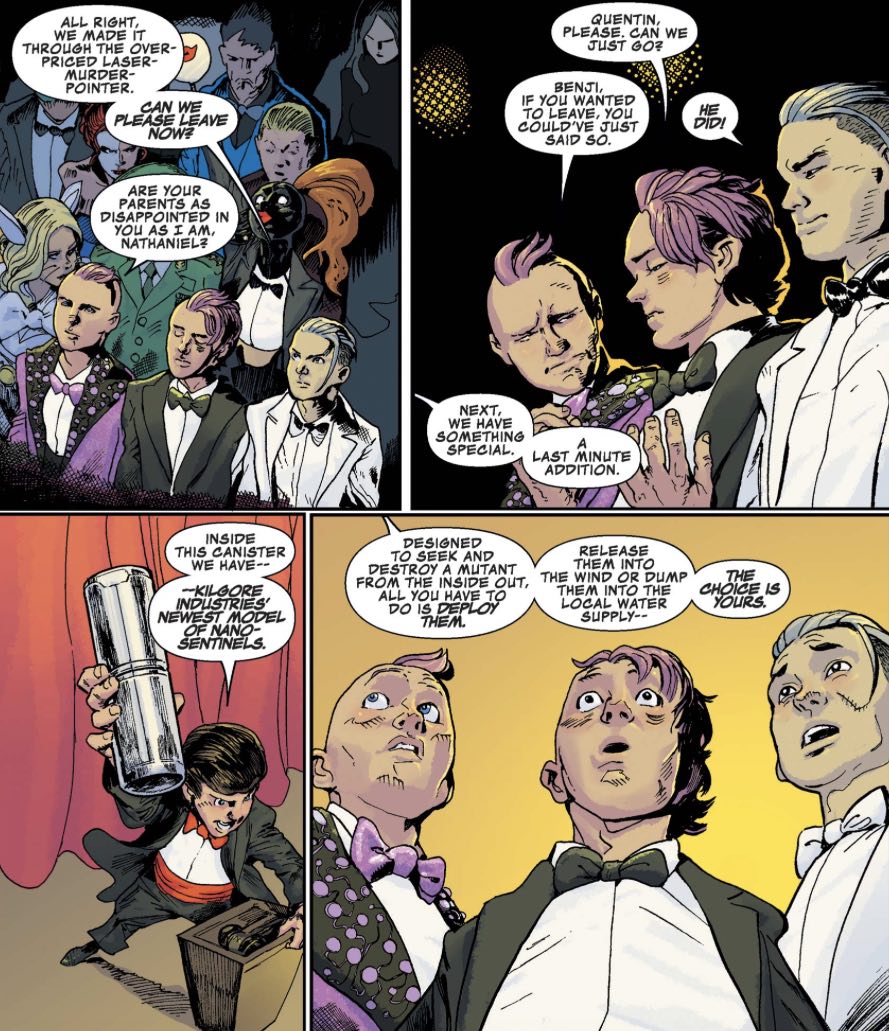 his decision to return to the X-Men, Quentin began a friendship with fellow Special Class student Benjamin Deeds, Morph, to overcome his loneliness. Ben was easily impressionable and Quentin would pressure him into sneaking out of school for late nights of drinking and mischief. Nathaniel Carver, Hindsight, had also taken an interest in Ben and, seeing what a bad influence Quentin was, tagged along on their next night out on the town. Quentin took the two to a super villain auction, hosted by none other than the Kade Kilgore and the Hellfire Club. One of the weapons being bid on was a canister of dangerous nano-Sentinels, which ended up in the hands of the Fenris twins. The boys hatched a plan to steal it utilizing Benjamin’s morphing powers but in the process learned that the nano-Sentinels were fake. Kade had used it as bait to see if Quentin was loyal to the X-Men again and was happy to learn that he indeed was, claiming that, like a nano-Sentinel, Quentin would inevitably destroy the X-Men from the inside. [Generation X (2nd series) #6-7]

Quentin’s disregard for others eventually came back to haunt him when Krakoa came looking for him. Burrowing though the Earth, his arrival at the new Xavier Institute inadvertently caused earthquakes and sinkholes throughout the city. Quentin had told the living island that he would return for him and seemingly forgot. Kitty blamed Quentin for the destruction and, although Benjamin initially defended his friend, he had some harsh words for him later when Quentin accidentally dropped a wall on Nathaniel when they were rescuing people from a collapsed building. He not only 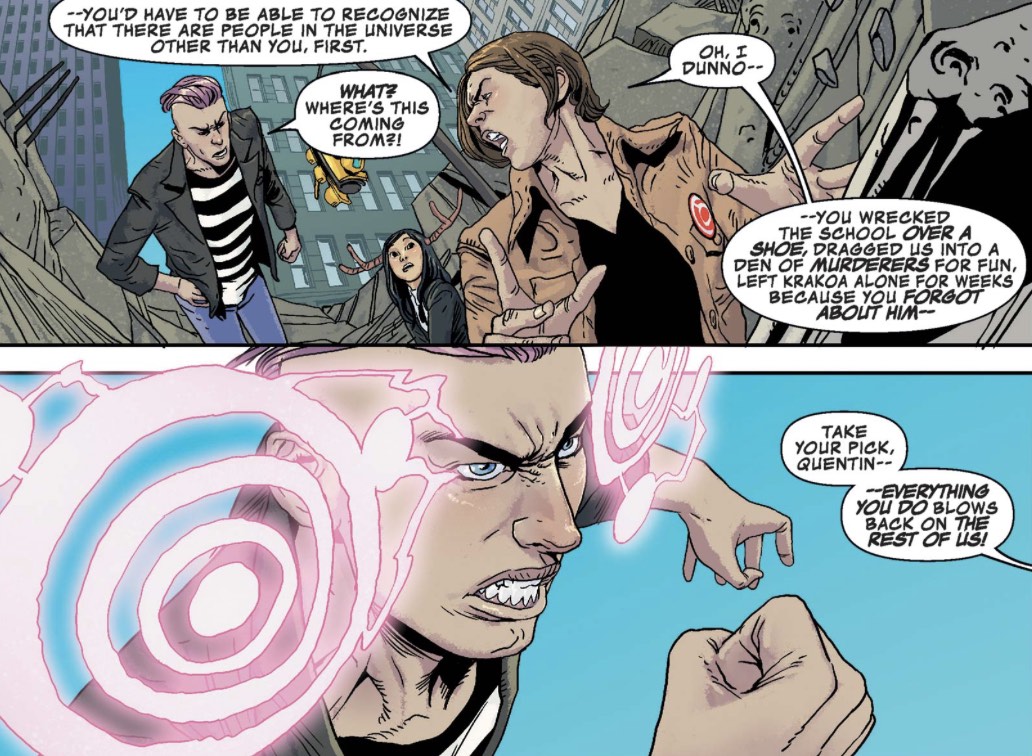 accused Quentin of abandoning Krakoa but echoed Kade’s words, saying that Quentin’s selfish actions constantly blew back on them. Quentin managed to save Nathaniel and Benjamin later apologized but the damage was done. Stung by the words of the only person he considered a friend, Quentin left the mansion with Krakoa. [Generation X (2nd series) #8-9]

Returning to the Atlantic Ocean with Krakoa, Quentin spent his time sulking on the living island and ignoring texts from Benjamin. Just as he was beginning to get bored, Kid Gladiator along with Thor (Jane Foster), and Warbird arrived seeking his help. The petty Shi’ar gods, Shaara and K’ythri, had challenged Thor and, after losing, summoned the Phoenix Force in contempt. Knowing that Quentin shared a connection with the cosmic force, Kid Gladiator was hoping his former classmate could control it and prevent destruction.

Intrigued at the chance to encounter the Phoenix Force again, Quentin accompanied Kid Gladiator and Thor to Shi’ar space to confront it. After Thor successfully lowered the Phoenix’s defenses, Quentin was able to enter the White Hot Room to communicate with it. The cosmic bird acknowledged that Quentin would one day possess it but informed him that it was not yet his time. Nonetheless, Quentin somehow managed to persuade the Phoenix to grant him a small piece of its 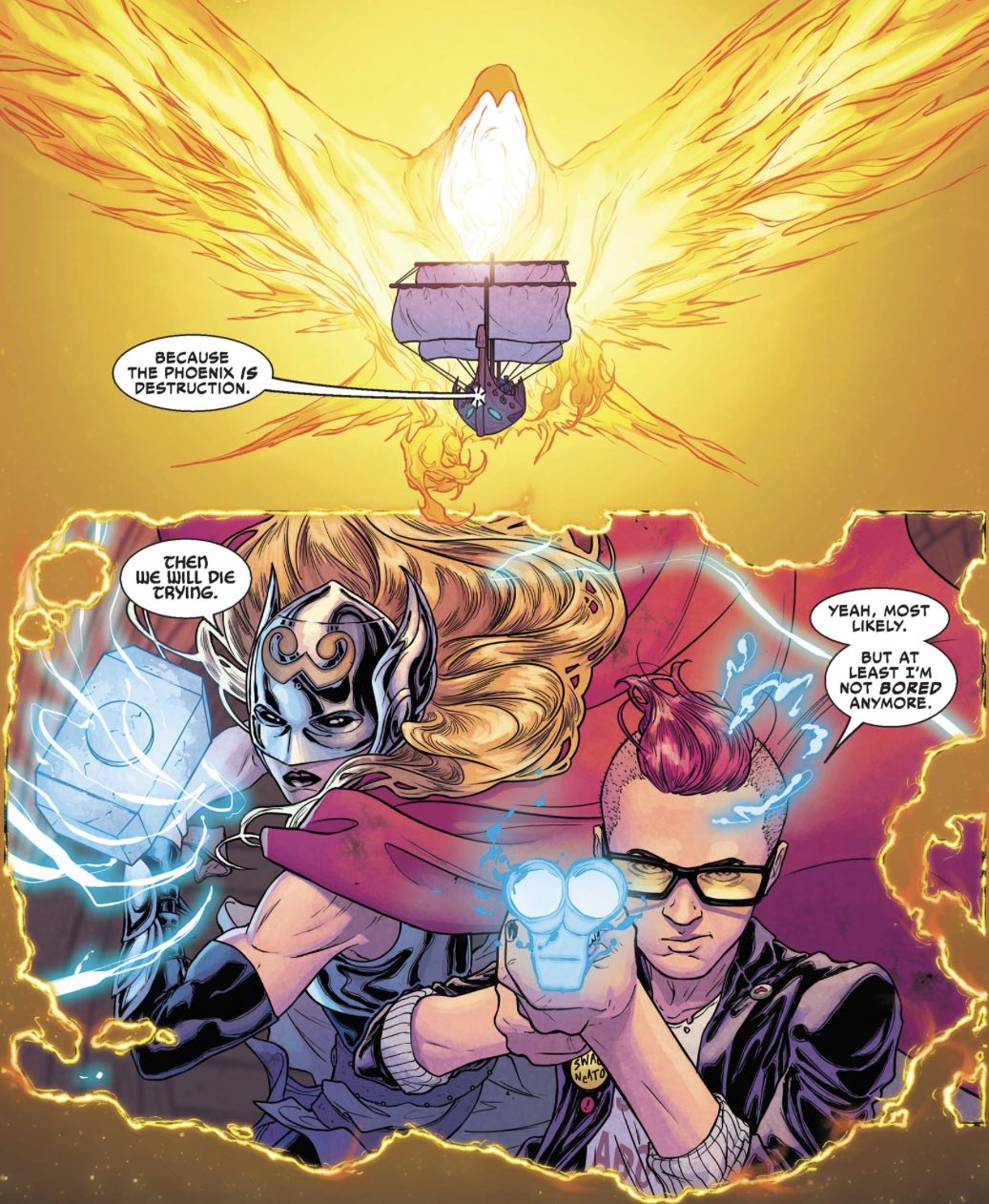 power and, after doing so, the Phoenix left the conflict to pursue other interests. The Shi’ar gods were defeated and imprisoned and, much to Quentin’s delight, the Shi’ar people chose to worship him as their new god. [Mighty Thor (2nd series) #18-19]

Quentin returned to Earth and resumed his self-imposed exile on Krakoa. Jubilee eventually arrived and tried to persuade him to return to the school. Quentin naturally refused, citing the X-Men’s plan to dump himself and the rest of the special class into the real world. Still in possession of a fragment of the Phoenix Force, Quentin also claimed that he was now too good for the X-Men. However, when Jubilee received word that the Jean Grey School had become unsynced from their dimension, Quentin accompanied his former teacher to investigate. 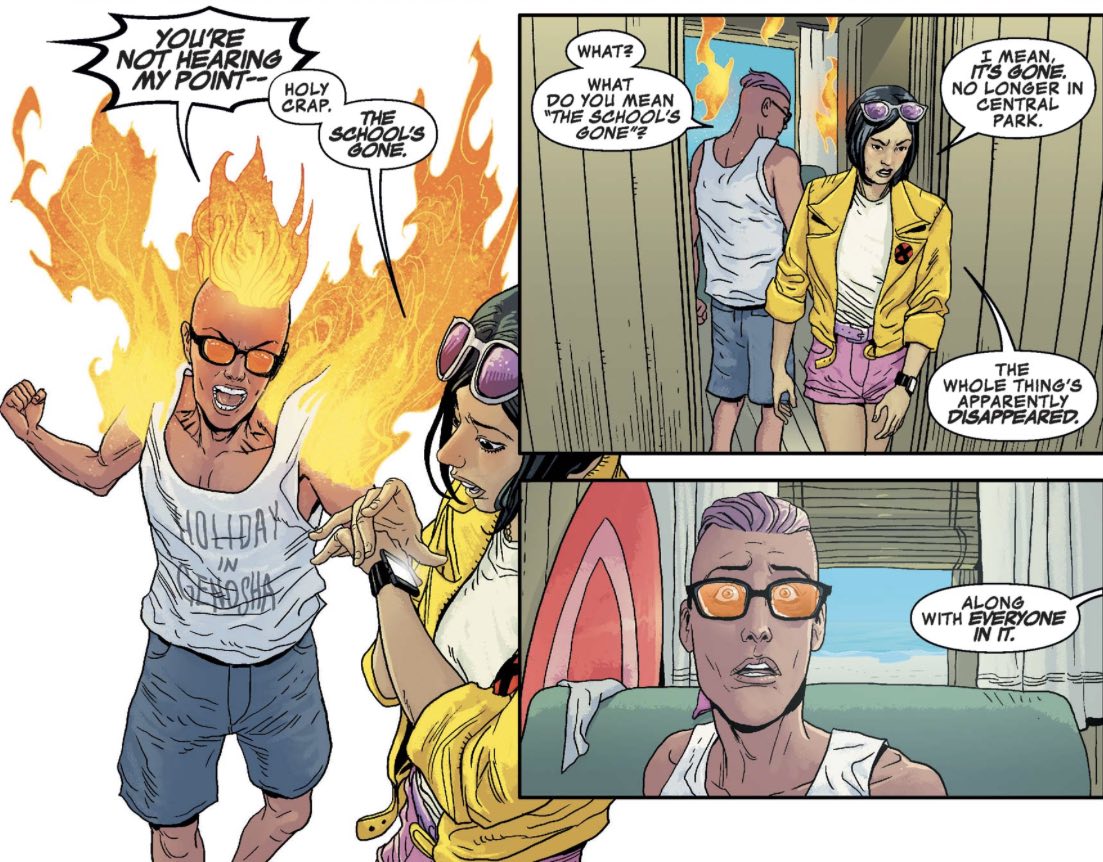 Arriving at the Xavier Institute, they discovered the school was under attack by M, who had merged with her vampiric inter-dimensional brother Emplate. M set her sights on her old frenemy Jubilee, ripping away her protective amulet and tossing her out a window. Due her vampirism, Jubilee immediately began to burn under the direct sunlight until Quentin used the Phoenix to save her, not only curing Jubilee of her vampirism but also restoring to her her mutant gifts, sacrificing his Phoenix Force fragment in the process but gaining Jubilees eternal gratitude in return. Moving forward, Jubilee promised to always vouch for Quentin and that he would always have a place in the X-Men. Quentin remained at the school, mending his friendship with Benjamin and reuniting with the special class, a group of students whom Jubilee and Kitty realized they had been underestimating. [Generation X (1st Series) #85-87]

When the time-displaced teenage Jean Grey started having visions of the Phoenix Force searching for her, she sought advice from former hosts, including Quentin. Quentin didn’t sugarcoat things and gave Jean a glimpse into his mind to show her the lingering devastation the Phoenix Force can have on one’s psyche. More concerned than ever, Jean sought help elsewhere but Quentin was on hand to assist her when the Phoenix Force arrived. After a fiery battle, the Phoenix Force succeeded in its ultimate goal: taking the young Jean off the board and resurrecting the true, adult Jean Grey. [Jean Grey #2, 10]

Quentin's sacrifice of the Phoenix Force had taken a toll on his mutant powers, reducing them to a fraction of what they once were. Deciding to take a break from the X-Men, Quentin moved to Los Angeles. A film crew decided to follow Quentin, hoping to capture some heroic exploits but were left wanting when Quentin did nothing but play video games and order take-out… 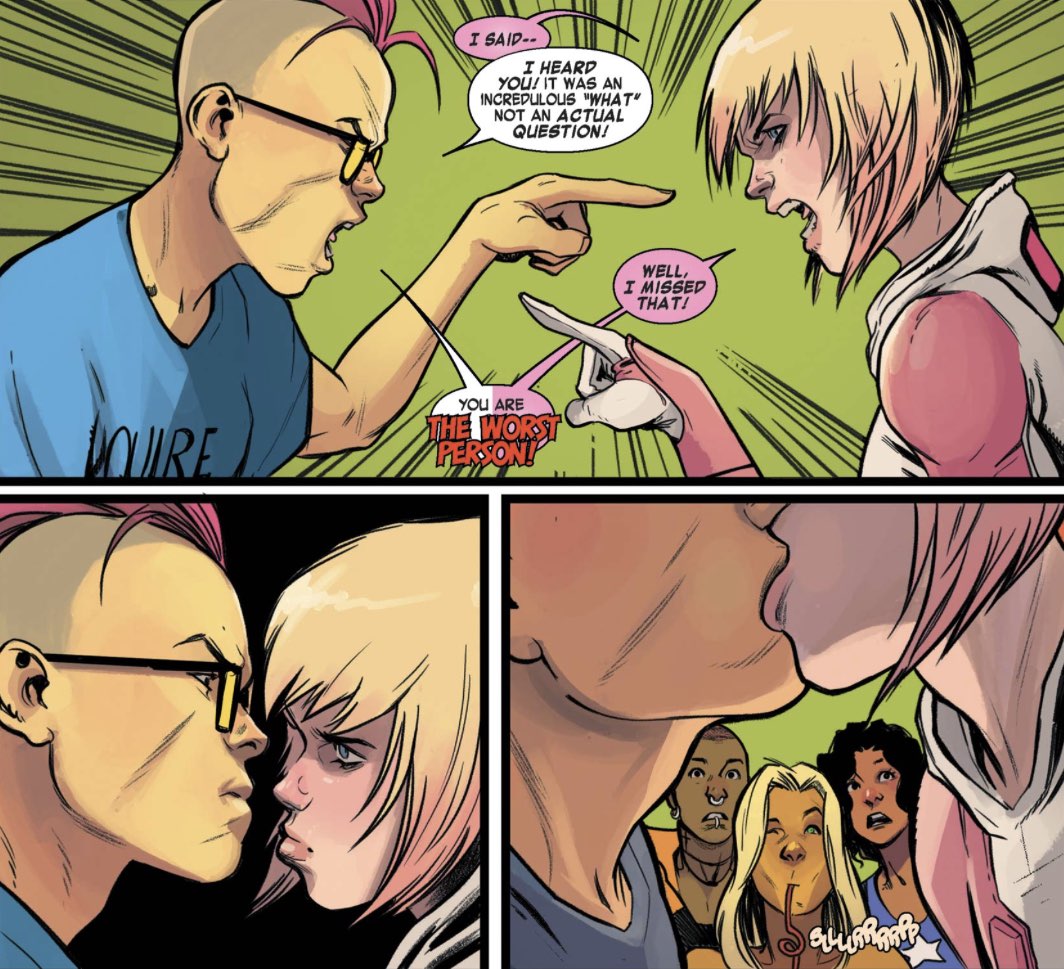 When Kate Bishop, aka Hawkeye, wanted to put together a new superhero team based on the west coast, Quentin answered the call. Kate wasn’t sure about Quentin being a good fit for her “West Coast Avengers” but, when she found out his film crew would help with funding the team in exchange for total access, she couldn’t refuse. Quentin naturally butted heads with everyone on the team, none moreso than Gwenpool, a happy-go-lucky weapons expert of mysterious origins.

Despite their bickering, Quentin and Gwenpool quickly gave in to the mutual attraction that existed between them and Quentin found himself as intrigued by Gwen as he was annoyed by her. During the team’s inaugural mission against B.R.O.D.O.K. and his giant animal women, Quentin was shocked to discover that Gwenpool didn’t have any proper superpowers, prompting Quentin to worry about her during the team’s dangerous exploits. [West Coast Avengers (3rd series) #1-4]

When Madame Masque and a group of villains lured the team into a murderous theme park, Quentin and Gwen found themselves separated from the group. Quentin questioned Gwen about the nature 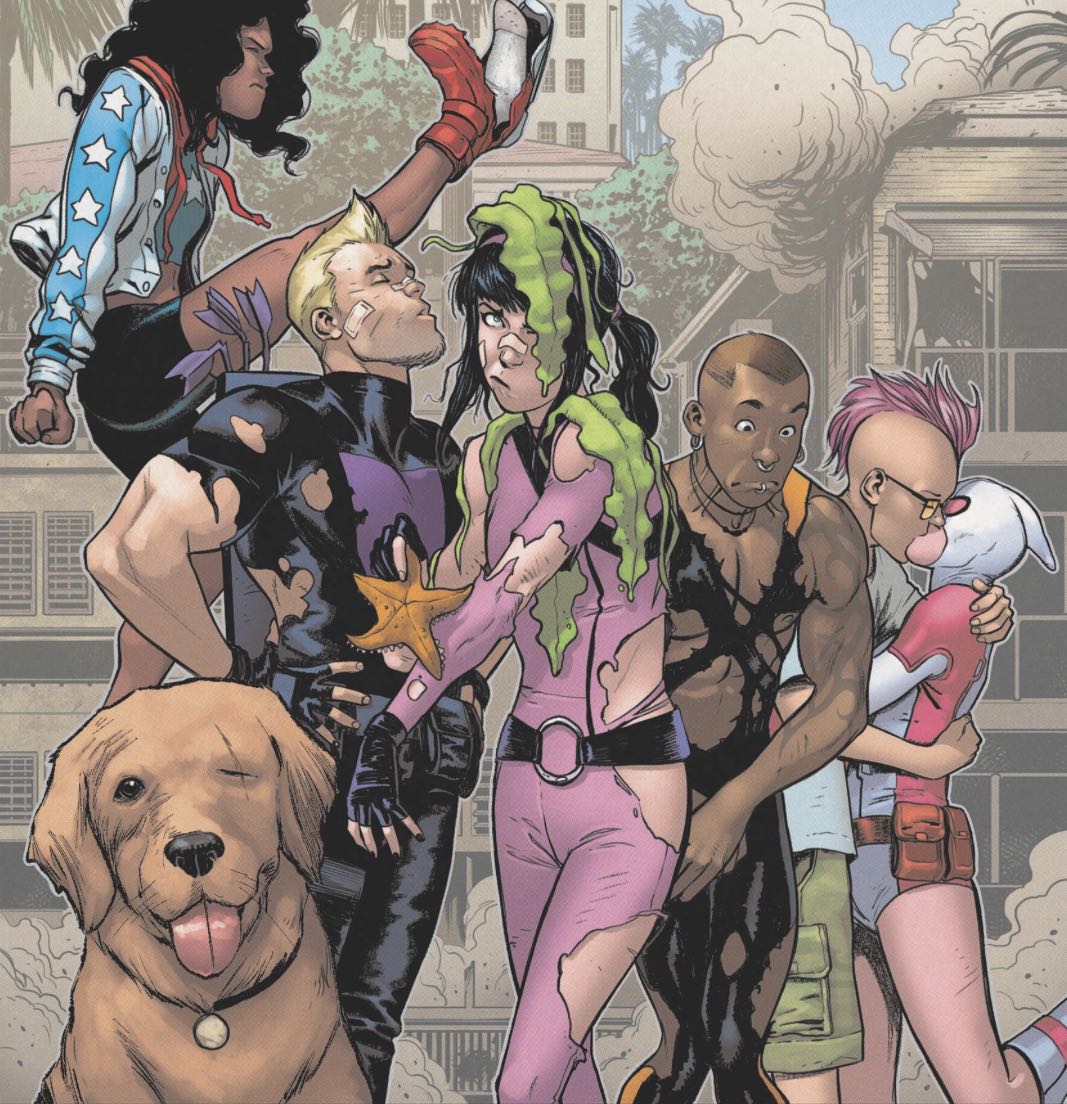 of her abilities and their mutual feelings for each other. Gwen told him she initially kissed him to give herself some story time and avoid being killed off. This combined with Gwen’s talk of panels, pages and reboots caused Quentin to seriously concern himself with his new paramour’s grasp on reality. [West Coast Avengers (3rd series) #5]

Despite the team’s initial aversion towards him, Quentin proved his value and loyalty to the West Coast Avengers, often using his mutant powers to protect his non-superpowered teammates from harm. However, the team didn't last nor did Quentin's relationship with Gwenpool. Instead, Kid Omega now finds himself on the new mutant nation of Krakoa, where given his status as an omega level mutant, Quentin is sure to have a siginifcant role...