At the dawn of time on the still cooling planet which self-important specks would one day call Earth, the potential for life existed. This potential became an entity known as the Demiurge, the 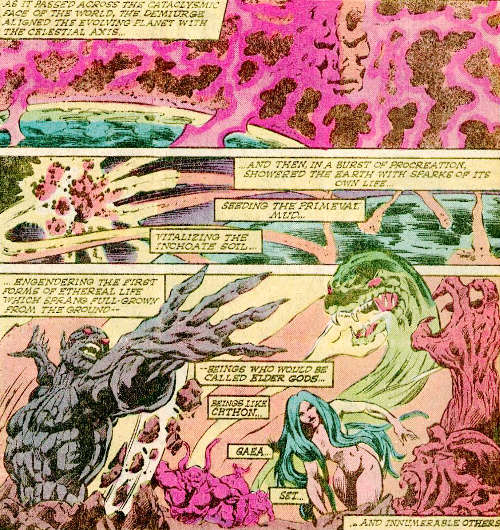 sentient biosphere for the entire world. When the Demiurge was ready, it unleashed living energies on the planet below, causing life to emerge as a diverse race of beings known to those who followed as the Elder Gods. These beings had no form or bodies as we understand them, although legends and myths have given them appearances mankind could comprehend. Chthon was among these Elder Gods, as were Set, Gaea, Oshtur and others. A creature of learning, Chthon began to study and classify the esoteric energies found on the planet, energies that would eventually be known as magic. By identifying these concepts that had no name and naming them, Chthon gained incredible power over magic on Earth.

While Chthon grew in power as a side effect of his research, his "brother" Set sought power for its own sake. Set discovered he could absorb the energies of his fellow Elder Gods, destroying them 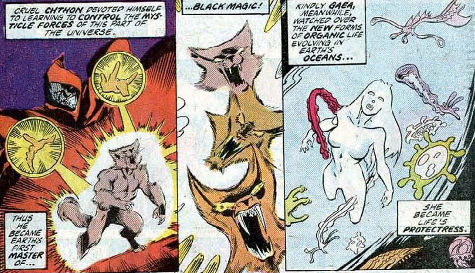 but increasing his own power in the process. Through this act, Set became the first murderer. Intrigued, Chthon began to copy Set's efforts, creating a field of magical study all his own that was fueled by death, the invention of necromancy. Chthon explored various avenues of magic, dark and light, in order to expand his realm of knowledge. His experiments led to the creation and transmutation of various lesser beings and races that had emerged on Earth since the formation of the Elder Gods. He may even have warped some of his fellow Gods with these efforts.

The actions of Set and Chthon led to war among the Elder Gods. Murder became common and the Gods degenerated into a race of Elder Demons. Of those that remained, only Gaea was still pure, and sought to protect the nascent lifeforms of the Earth she had been cultivating. Seeking a champion, Gaea communed with the Demiurge and was impregnated by its power. She gave birth

to a new form of God named Atum, who became a powerful foe to the Elder Demons. By absorbing the godly energies of his fallen foes, Atum recreated Set's actions and transformed himself into Demogorge the God-Eater.

Demogorge was an unstoppable opponent even when Chthon and Set joined forces against him, and Chthon decided to cut his losses. He created a pocket dimension called the Flickering Realms, near Earth but outside the purview of Demiurge and Demogorge. He escaped into that realm before Demogorge could consume him. Set and his children followed suit, creating their own pocket dimension. With the most powerful demons dealt with, Demogorge obliterated all other opponents. He reverted to his Atum form and retreated into the heart of the sun, allowing the godly energies he absorbed to return to Earth in more discreet packets. This eventually led to the rise of lesser gods and demons over the following millennia, such as the Hell-Lords and various pantheons worshipped by humanity. [Thor Annual #10, Silver Surfer Annual #2]

Chthon had not left mindlessly or in haste, however. Before departing for the Flickering Realms, Chthon transcribed all his knowledge of black magic into a series of parchments, left behind to

maintain a connection to the realm of Earth. Anyone who read from the pages and evoked the power of Chthon risked their eternal souls and chanced allowing the Elder God back into the realms of men. These words were indestructible but changeable, adapting over time throughout different civilizations as parchments, scrolls and would one day be bound as a book called the Darkhold. The Darkhold was one of the Cornerstones of Creation, and Chthon would always have the opportunity to return to Earth so long as it existed. [Avengers (1st series) #187, Doctor Strange, Sorcerer Supreme #11, Mystic Arcana: Sister Grimm #1]

A pact existed between the three surviving Elder Gods, enforced by the threat of the Demogorge and the power of the Demiurge, that Gaea alone would have the right to occupy the Earth dimension. Set and Chthon still found ways to influence their home reality, but their physical presence was strictly forbidden. This pact was so strict it even extended to Oshtur, a wandering Elder Goddess who left Earth before the murders began and had no part in what followed. Oshtur agreed to abide by the terms of the pact once she returned home, and assumed her own place in a pocket dimension known as the astral plane. With Oshtur as something of a neutral party, the four Elder Gods worked together to create the Crossroads of Realities, a distinct realm where the Elder Gods could meet if necessary, separate from their individual places of power where no God would hold the advantage. [Marvel Tarot #1]

Eons passed, as Chthon busied himself with his studies while also monitoring his "siblings" and the Earth realm. Each Elder God was in many ways a reflection of the others. Like Set, Chthon sought power by any means and regardless of the consequences to others, although Chthon had 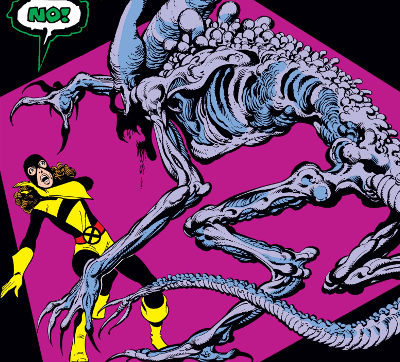 goals other than power for itself. Like Oshtur, Chthon was a sorcerer responsible for cultivating and giving name to the mystical forces of their realm, although he had no qualms about exploring necromantic energies on top of the egocentric, eco-centric, and exocentric forces the Omnipotent Oshtur mastered. Finally, like Gaea, Chthon was fascinated by life and a creator of lesser races in his studies. Chthon was more “mad scientist” than nurturer, though, producing abject horrors such as the N'Garai in his work. The creations of an Elder God were also not bound by the pact, and so Chthon could send the N'Garai through to Earth to do his bidding. [Darkhold: Pages from the Book of Sins #4, X-Men (1st series) #96]

Among Chthon's other creations was Varcolac the Wolf Demon, who produced a race of offspring. These demonic lycanthropes threatened the early humanity Gaea was overseeing and Oshtur had 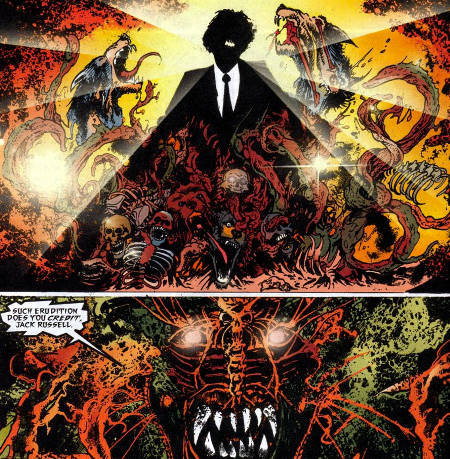 come to care for. The original Wolf People were eventually driven to near-extinction, but a spell to create them continued to exist in the Darkhold, and various civilizations rediscovered the curse of the werewolves through those malevolent pages over the centuries. Varcolac had other offspring as well, such as the giantess Angerboda he sired with Echidna, granddaughter of Set. Born of the power of the two Elder Demons, Angerboda would become mother to the infamous Asgardian monsters, Fenris Wolf and the Midgard Serpent. [Werewolf by Night (2nd series) #1-4, Marvel Tarot #1, Marvel Spotlight (1st series) #2-4]

Oshtur was sympathetic to the plight of humanity, and it pained her to see Chthon's Wolf-Men and Set's Serpent-Men prey on early man. She sought to exploit the same loophole as Chthon by creating the Bird-Men of Akah Ma'at to watch over and shepherd humanity. Like Gaea begat Demogorge, Oshtur also begat a champion of her own named Agamotto. Supported by Oshtur and her chosen companion, the alien Hoggoth, Agamotto became Earth's first Sorcerer Supreme and opponent to Chthon. [Marvel Tarot #1]

In spite of Chthon and Set's efforts, humankind eventually overcame the demons set upon them, and civilization thrived. In pre-Cataclysmic Atlantis, a powerful sorcerer named Varnae acquired the Chthonic scrolls and parchments and gathered a cult of black magic users into his service. 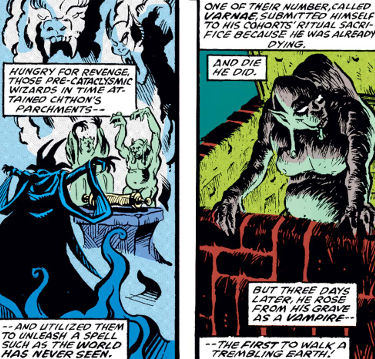 Using the scrolls, Varnae channeled the power of Chthon in a ritual that would preserve his life beyond the mortal wounds he had suffered in war. Three days later, he emerged from his crypt as a new kind of supernatural creature, the vampire. The Great Cataclysm of Atlantis was a setback for both sides, however, for it eliminated most of Varnae's vampires, as well as the priestess Zaredh Na, Agamotto's intended successor. Once again, the power of Chthon was retained in his scrolls, and therefore found in all subsequent vampire species and variations throughout history. [Doctor Strange, Sorcerer Supreme #11, Conan the Barbarian #245]

Ever the sly opponent, Chthon manipulated the Bird-Men of Akah Ma'at from within, corrupting one named Varuna. Feeding his arrogance, Chthon convinced Varuna that humanity needed judgment more than protection. The influence of Chthon led the Bird Men to split into two factions led by Varuna and Shamhat Saraswati, Agamotto's next intended replacement as Sorceress Supreme. The civil war between Varuna's Asura and Saraswati's Seraphim grew so violent that Oshtur banished them from Earth entirely to the Planes of Sephiroth. A disgruntled Agamotto withdrew from the affairs of Earth as well after the loss of his favored discipline, netting Chthon a pair of victories. By playing the devil whispering in the ear, Chthon had brought war to paradise and turned these angelic-like beings against each other, a story that would reappear in the myths and legends of many religions of man. [Marvel Tarot #1]

Worship of Chthon was once common on Earth, either directly or through the worship of his demonic creations the N'Garai, who ruled over mankind for an age. Steps were taken by followers of Agamotto and the Vishanti to limit Chthon's influence on Earth. The Elder God had a particular affinity to a form of mysticism known as chaos magic, and was even worshipped as the God of Chaos. A cabal of white mages weakened Chthon's influence by spreading a lie that Chthon did not exist, and even that chaos magic wasn't real. As humanity forgot him, the absence of their fear

and worship weakened the Elder God. Denying the existence or use of chaos magic also removed one of his tendrils of influence over the earthly plane. [Mighty Avengers (1st series) #23, Avengers (1st series) #503] "The Great Lie" apparently took root sometime after the fall of Atlantis in roughly 18,000 B.C., for Chthon was forgotten as a god 6,000 years later during the Hyborian Era of Conan. [Conan the Barbarian #245]